For the last ten days I've been trying to fill a hole.

For awhile, I thought this hole was related to my boyfriend being gone (and off the grid). In many ways, it is. Or it was. There is a really big, really empty space in the bed next to me. My house is obscenely large for one person. The number of cucumbers, cantaloupes, and peaches are more than one person should reasonably eat.

The first day was the hardest, until the second day. Then the third day was a little easier, and it has been up and down since then. I would say that day six was the hardest, except that I'm writing this through tears. It feels like we've broken up. My body echoes the rattling in my mind and they set up an unfortunate echo across the canyon of the emptiness.

My instinct was to fill this time completely with dates with friends, work, and other projects that would keep my mind occupied, but instead I did a lot of sitting and staring into space. Some people call it meditation, but I think that elevates the experience beyond what it was for me - holding space for myself. Breathing. Not checking in on my phone or reading a book, not making lists or prioritizing. Just sitting with the experience of who I am in this moment and exploring the hole.

On day two I saw an old friend for a massage, and like all good therapists, she asked me what I needed. And I answered the same way I do whenever I see a healer - whatever you think I need. Most of the time they ask a few probing questions, but she asked me to draw an angel card. It said forgiveness, which made me cry again. Am I supposed to forgive myself? My boyfriend? My parents? I needed a NOUN card to tell me to forgive the cat, or my car, or my uncle.

But forgiveness isn't about them, it's about you. The noun is inconsequential. It is about letting go of the things that don't serve you, things that dig the hole deeper rather than shining a light in to help you navigate.

On day four I received a card from a former student. Many months ago I had written out individual intentions for a yoga class - 20 different options which were selected by participants without seeing them. They were my intentions for myself for the year. I instructed them to use the word for the intention of their practice, and if it suited them, to hang onto it for a bit. But then to pass it on to someone who they thought could benefit from it.

The best part of giving is in passing on the lesson, the intention, the blessing. To acknowledge, you need this more than I do.

The card I received contained many messages that what I'm doing really worked, really resonated with this woman. It also contained the tiny slip of paper that she had kept for the previous nine months with the word FAITH on it. She gave it back to me, because she said she thought I could use it. 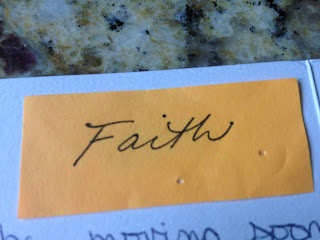 This crying thing is new to me. I didn't cry before. I held it in, under control, and just simmered. Sometimes it would boil over in a sickness or a mysterious and disturbing change in my vision, but nothing like the streams of tears running down my face for the past year and a half. I have let it get the better of me on a few occasions - and tonight is no exception.

I cry about a lot of things: loneliness, jealousy, lost dreams, lost relationships. I try to hide from the symbolism of certain circumstances, like the untimely death of my flower girl by her own hand... knowing full well that her death has nothing at all to do with me and simultaneously feeling a bit responsible. The death of a child. Another person who slipped through the cracks. 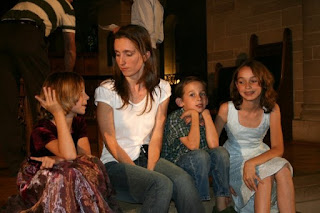 When people tell me that everything happens for a reason, I think on these kinds of unfortunate circumstances - the shadows beyond the place lit by forgiveness and faith. This is the hole. It is not an absence of a person or presence, it is not as simple as mere loneliness, the hole is the place where our best efforts cannot reach us.

As a doula, I watch women (families, really) drop into this hole as they navigate the treacherous waters between this world and the next and draw upon every last reserve to bring their babies across that tenuous border. The same thing happens when I watch a friend walk to the edge of this lifetime. I'm compelled to jump in with them - after them - into the blackness. But then it would be the two of us at the bottom of a well, in the dark, and at some point we'd face the unhappy decision of who should eat whom to survive a few minutes longer. You see, I've never given birth, and I haven't died in this lifetime. I have no idea how to help if I end up down there, with you.

Most people approach the person in the hole with some of the many implements from the board game Clue. Remember? The rope, the candlestick, the wrench. These are the life-saving, let-me-fix-you tools. And then there's the dagger, the pistol, and the poison for putting you out of your misery. But all of these things are weapons. All are an assault on the person down there. Saying "have faith" or "everything happens for a reason?" just additional tools in the arsenal.

The hardest thing, and truly, the only thing worth doing, is to be there. To say "I'm here" or let your soul sit by. If it's a hole you've been in yourself, maybe you jump back in and navigate through the darkness, but jumping in is perilous. You could break your leg or land on top of the person you're trying to save. So you have to choose wisely and decide whether the martyrdom would be worth it - whether the person would benefit from what you have to offer. But you can reach in with your heart or your hand and simply be.

When you're in the hole, there's something to be said for having your hand held in the dark.

I missed this chance with my flower girl, just like I missed it with my cousin, with Jon, with so many who have been swallowed whole by the darkness in life. It makes me cry and question my faith. It's what makes nights like this hard.

There is space in my life for faith, for forgiveness, and for a space beyond those greatest of intentions. The hole can eat you up, or it can become a portal to whatever comes next.