Satya: For This I Am Thankful

I'm not so great at the Thankfulness month or the gratitude journal. Consistent, daily practice of gratitude is important, and while I'd like to think I keep Christmas in my heart, past, present and future, I'm still working on Thanksgiving.

So here, my dearest friends, are the things for which I am most thankful. They aren't in the order of the things I most appreciate, they're simply in the order in which they pour out of my fingers.

My body works.
Sometimes there are tiny aspects of my body that don't work so well. I have a bum knee right now, and I've managed to mangle my hand several times today alone. Tan is a place I'll never visit. But I can get to the places I need to go without worry or strife, and the trepidation I feel stepping out onto an ice rink for the first time in ten years or tying my bikini on in double knots are simply distractions from the truth: I've got it pretty good.

My family accepts my crazy.
While I haven't completed my MD or JD (or a doctorate in anything), I know that my family trusts in my process of finding my way in this world. I did not know this until after I had turned 30, but parents just want their children to be happy. They might pretend that they want their children to earn millions of dollars, have a variety of degrees or babies or sports cars, but the reality is that THE ONLY THING THEY WANT IS HAPPINESS. After telling students this for years, I finally heard myself say it and thought... well, maybe that's true for me, too.

My work is meaningful.
When I walked away from my corporate-ish job and into the world of self-employment I had a very hard time answering the question, "So what do you do?" without blubbering and trying to change the subject or causally dropping appetizers down my dress (true). When you come from a family of doctors (MD and PhD and in some cases both), "I teach yoga" sounds about as meaningful as, "I alphabetize spice cabinets for people." It would be untruthful to say I can now comfortably approach the people who attended college with me and tell them what I do, particularly if they are also doctors, lawyers, and professors (which they are). But that does not change the fact that people who work with me say thank you, and they don't have to. In fact, they don't even have to come back to my class, and yet they do, and they say thank you. They say, "That's just what I needed," or "no one else would answer this question" or "I am too embarrassed to ask my doctor."

My deep and lasting friendships.
Despite the fact that I was in a royally bad mood for about five years, I've managed to find some really good folks who are not afraid to tell me the truth, even when it is hard. My best friends are the people I admire the most: they believe in what they do and the want to have fun. Forget the American Dream (which eludes all of us) find happiness and people who answer when you call as often as they reach out to you.

My appetite for learning is insatiable.
While it has gotten me into a few binds, like no lunch hour during high school, an attempt at a triple major in college, and a resume that leads most potential employers to believe that I'm 20 years older than I am, I am grateful for this. I want to get the most out of the minutes I have here. I'm a bit Mulder... #thetruthisoutthere

The yogis say, "satyameva jayate," which means, "the truth is always the victor". It is, in fact, the truth that we are most grateful for. It is what we seek, the kernel of wisdom that remains once all of the false illusions fall away. When we practice gratitude, we are really practicing truth. Satya.

One Thing Is Enough

If you've met me, you know how much I LOVE efficiency. I have lists and processes, containers and labels, and more google calendars than there are colors for. I went to a top tier liberal arts school that teaches one class at a time because it was the only way to triple major and still play in the orchestra, dance, stage manage, and work four jobs.

In high school, I didn't have a lunch hour because I took advantage of all classes. For the entirety of my adult life, I've had more than one job, and I think if you saw my exhaustive resume, you'd understand why I was perpetually exhausted for 12 years. Every day I knelt before the altar of One More Thing.

We've discussed a few of my secrets of efficiency, but I'll recap some favorites in case you'd like to add them to your collection:
- In the interest of healthy eating, I've resorted to pureeing everything into one unholy smoothie of gawd-awfulness. You can add spinach to a fruit smoothie, but if you also dose it up with protein powder, flax seeds, chia, seaweed, molasses, hemp, spirulina, probiotics, raw cacao and maca it starts to taste nearly exactly like shit.

- Reading with one-eye covered to preserve the vision for extended reading later. Like a pirate. You read for an hour with one eye covered, then take a break to do sixteen household chores (or pee) and then switch (it turns out this is not why one has two eyes).

My body retaliated against all of this supposed "efficiency" two years ago when I simultaneously had a sinus infection, ulcers, a mysterious bacterial infection that may have been Scarlett Fever, C. diff and chronic and debilitating exhaustion.

This was my body teaching me a very important lesson: two can play at this game.

It was not easy to stem my addiction to overdrive. Sometimes I still notice myself layering in more than might be considered humanly possible. During those times, it helps me to think about my mother's favorite saying regarding toddlers:

"Only give the baby as much juice as you'd like to clean off of the floor."

What you ask your body to juggle, your body will ask you to juggle. And you'd better be ready for all of it to fall on your head.

Turns out that (as of this writing) we only receive one body with which to navigate this one most precious life.

These bodies are not built to withstand constant multitasking. Our eyes point in the same direction. Our hearts have one function. 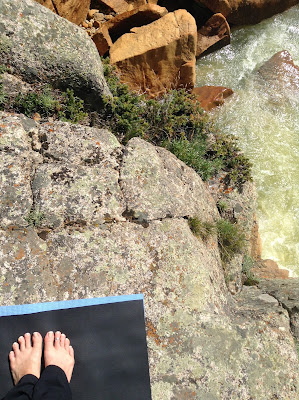 If you are compelled to do more than your body can manage, you will pay for it later. As tempting as it is to push to the breaking point, I urge you to push instead towards the point of comfort. Then add one new thing. If it becomes stressful, then stop. Remove one thing. Find the sweet spot of just enough challenge that life is interesting, but not so much that you're eating a sandwich in the shower or peanut butter straight from the jar.

If you need to practice, go to a yoga class. That's what it's for.

Movie Stars, Hungry Ghosts, and The Cycle of Life

I've been riding a roller coaster for a year and a half right now, which is well-predicted by my BBT (if you're out in a field beyond fertility lingo, that's basal body temperature... it tells you which hormones are at play and whether you are ovulating, pregnant, or not). If I were to graph my emotional well-being and overlay it atop the BBT charts, you would see a striking resemblance, like a mountain range and its shadow.

When my temperature goes up, so does my mood! My hope! I could be just nine months away from a bouncing baby human!

When my temperature goes down, my mood withers. I try to think of all of the consolation prizes like another trip to the hot springs without the fear of nuking a baby, at least one more month of binge-watching The West Wing while painting my toenails, or 30 more days of rock-hard abs (yes, I have two of them!).

In high school I spent some time acting. I thought I might go to Los Angeles and be the Next Big Thing, or possibly fetch coffee for the Next Big Thing, or at worst sell tickets to the movie staring the NBT. It is entirely possible that I was good, or that I had an "interesting look," or that someone was taking pity on me, but I was referred to a local agent who referred me to an agent in Hollywood. Holy smokes, I thought, this could be it.

My acting coach at the time (we'll call him "Bonkers" for the sake of this blog post) took me out for a cup of coffee and gave me his frank opinion: Hollywood will eat you alive. There is always someone taller, prettier, blonder, younger, or more willing to eat caterpillars than you are. You don't have the guts or the drive to make it all the way. They'll eat you up and spit you out. Plus, I'll tell you a secret: they're never happy anyway.

This was absurd, of course, as all teens raised in These United States can tell you the exact recipe for happiness: go to LA, get famous, enjoy.

Except we slightly older and more jaded folks know that this isn't true, otherwise the poor unfortunate famosas wouldn't be rehabbing over and over, or buying and selling rights to their organs, or insuring their buttocks. They've fallen victim to what the Buddhists call something like Hungry Ghost Syndrome. Hungry Ghosts are enormous, surrounded by delicious food, and have a pin-sized holes for mouths. Even when they eat constantly, they can never satisfy their appetites.

In my case (and perhaps in yours, too?) my mouth isn't the size of a pinhole, it is my focus. By gluing my eyeball to the end of a scope I've managed to tear the focus away from the wonderment that surrounds me in the world and keep my full attention on a distant target that is... well... distant.

It isn't our fault. Whether you're transfixed by the dream of singing with Billy Joel or the cure for cancer, if you're unaware of where you are, you're living your life through a pinhole. I'm not saying you should ignore your dreams (or seriously, if you're onto something cancer-wise, rock on with your bad self and we'll help you with teamwork or something). But take some breaks from star-gazing every once and awhile to live with your feet on the ground. Feel the sand in your toes.

Sometimes the sand is the fact that I'm going to be an auntie in a few quick months, or the wild bobkittens who live underneath my house, or the 353+ people who think I have something to teach.

Sometimes the sand is you, off somewhere in the dark, having a moment because I had a moment and said something about it.

And sometimes the sand is just sand. But that's not too shabby, either. 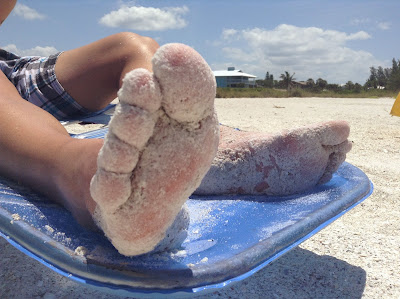