The Magic Giant Voice of God

Are you ready for this one?

I considered not writing one this year – just letting the day slip by while I do my best ostrich impersonation, but I just couldn't help myself. I have a few things to say.

Somewhere in my teens, I cleverly decided to give up prayer for Lent, as a tangible offering of my release of the very concept of faith.

I didn't go back. Once confirmed, I really almost never set foot into a church. And now I'm not sure I belong, because of the marriage and divorce and the staunch feminism that just cannot keep her mouth shut when people pray for all of the “unwed mothers.”

Last year, right around Mother's Day – the day before, in fact – I had added hope and joy to the graves straddling my dead and buried faith. Love was on the war-path, like a goddamned zombie who just REFUSED to die despite my best attempts at burying it. I was so mad. Knee deep in the pit of despair, the cement of self-pity swallowing my ankles. Former friends and lovers launching spitballs at the back of my neck, kicking me while I was down. The internet was rife with people bitching about being mothers to heathy children.

Because it is hard.

It is. It is the hardest.

It's probably harder to be the mother of a sick baby. Or a dead baby. Or an imaginary baby.
Right? If we think about it? I know we don't want to, because we smell grief and bolt off of the nearest cliff, but even if you get a whiff of it you acknowledge that your life is better than that, even if you have banana pudding in your hair. Even if you haven't had banana pudding since Tuesday.

So there I was, sinking. People still saying THINGS about me not being a mother. Like it was a personal failure. Like it was God's Plan. Like I had so many babies from other people, or so many bags in my arms already, how could I possibly take on one more? Like I had missed my chance, like The Fates had moved onward.

And faith and hope, joy and love, all dead and gone. Just love wandering around emaciated and bloodthirsty, hand in hand with jealousy, chasing after their dog resentment.

And instead of starting to drink heavily, like a normal writer, like a well-adjusted person, I just started to sink into an empty, early grave, my own thoughts poisonous enough. I had the kind of angry, yelling-into-the-canyon conversation with God that ended in tears and back turning. I speak for both of us now (and spoke for both of us then, I suppose, as the canyon never yelled back) - and made sweeping statements about how difficult it had been to endure God's silent treatment – the lack of foretelling and magical symbolism. The true lack of magic, in fact, as life simply got more and more unreasonable, and I remained less and less pregnant.

There is a profound loneliness in infertility, as there is in partnership with an addict, as there is in your life, too, I imagine. Loneliness is strikingly common – frighteningly universal. God is literally laughing at every single one of us who peers at our toes and feels aloner than anyone else in the world, and yet is as alone as anyone could ever be.

We are supposed to give up on the fact that another person will make us feel less alone. That a partner or a baby, or a great job or tight ass will somehow elevate us from the condition of feeling alone. But in fact, everyone I know feels alone at some point, even the prolific and polyamorous entrepreneurs with butt implants and wickedly popular instagram accounts.

Sometimes they are the alonest.

But I did. I felt abandoned in the worst way, even though everyone who has a sense of faith tells you that God is always with you (unless you're a dinosaur). Rumi said something about god always singing your name, but Rumi often pisses me off because he is so right about things, and also because he was a man. And also because his god sang to him, and Rumi heard and wrote some amazing things – the sorts of things that echo for so long you imagine there must be a cosmic looper somewhere, instead of a big canyon in your mind.

It had been twenty years since my last confession, and a good 32 or more since I had last heard the voice of God with my actual awake and sober ears. Yoyo Ma had this cello, and through it, God had a channel straight into my heart, like a tractor beam of love with sparkles and unicorns. There was only one concert, but it was all I needed to remember part of what brought me here into this body this time. Since then, God and I had played this dance whereby she was always on the way out as I was on the way in. I could see her coat tails around the corner, or her shadow as the sun set, but she was always going away, and I couldn't ever quite make out what she was saying.

And then the silent treatment.

So last Mother's Day (the day before) I sat in the bath writing a scathing blog post about how hard it is for basically everyone on Mother's Day. It was me giving up on motherhood and life, with a voice of resignation, not surrender. It is different, to resign oneself and give over the hopes and dreams.

To drown love in the bathtub.

And I went through the motions of life, making no more plans. Wrapping up. Fulfilling commitments.
Waiting for the booming voice of God to give me some direction. Or lightning.

And one month later, she did.

Sometimes I work at yoga festivals, coordinating things like outdoor tents with music (and lightning)? After my partner left me alone for the millionth time, to head to spend the evening celebrating his birthday with other friends, I did the things – the motions of getting ready for an evening concert with the Big Band.

I kept calling the band Big Magic, because of the Elizabeth Gilbert book, and also because I had run out of spoons and fucks and was just trying to fulfill my commitment so that lighting could strike me dead PLEASE GOD. But they were called Magic Giant, and they were three guys with a whole lotta equipment and smiles and bouncing.

The violin caught my eye.

Sound checks are usually one instrument, one voice at a time. People plucking and clucking and saying “check” and counting incessantly. And that happened. And then they wanted to check balance, so they started into a piece of music.

The violin had caught my eye earlier, but now it caught my ear. I stopped.

The first time it happened, I was nearly three years old, and my deranged parents took me to a YoYo Ma concert. It was 1983, the first time God sang to me.

And here she was again, on the violin, in the wind.

The vocals: I'm not leaving you alone.

It was the song of my soul.

Have you heard the song of your soul, my darling? Have you heard it from outside, from the mouth of another? Fully accompanied by the electronic magic that blends and loops in a way that man alone cannot? They were so happy. Singing my song. I'm not leaving you alone. As if God had placed them down in front of me and said:

God, on a looper.

Faith, hope, and joy, like the three wise men, singing a song of love.

(The lyrics are maybe a touch stalker-ish, but that's ok. God loves the stalker in you, too).

My life did not magically transform because of the song of Magic Giant, but the insidious mantra in my mind had been re-set as their words and melody took root in my mind and reminded me that I was not alone.

I would like to tell you that after that day, I never felt sadness again, that from that day forward, everything unfolded perfectly, but the reality is that life continued onward, in her steady chaotic way with car accidents and hurricanes, early unfathomable loss and plenty of tears and harsh words. Motherhood continued to evade me, love ran rampant and directionless. But the mantra remained, and miracles unfolded, too.

I have a lot of grief, and I'm all set on shame, too. Grief and I have a lot of work to do, because we are partners in this absurd three-legged race of life, and while it's easier to give up and lie down, we can also work together.

I've learned to mother my grief – let it nap when it's tired, tantrum when it doesn't get it's way. Sing to it, the way I encourage new mothers to sing to their babies. Charm it, like a snake who is mostly just heavy and occasionally deadly. And sometimes I leave it with a babysitter and fly across the country to hear the song of my soul.

To re-set my mindset, because life goes a whole lot better when the voice in my head tells me I'm not alone. To seek out joy, hope, and faith.

The voice of God, in three voices and a violin. 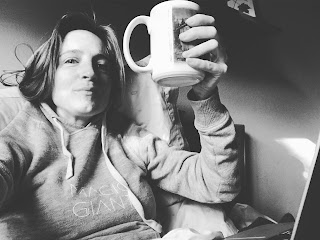