A few weeks ago I was at an ashram in the Bahamas – the same ashram – the famed ashram, where I had once felt like a prisoner. This time it was different, because work, because age, because I knew more about myself and what I was getting into. A Karma Yogi – a young American woman – was filming a presentation I was attending, and when the opportunity presented itself to participate, she hung back. She sat, slumped in her chair, watching.

I've spent a lot of time slumped. Slumping. Protecting my heart from the risk of opening it up and letting anything in.

Last November in Costa Rica, the sha(wo)man broke me open in, after Hurricane Otto and the travesty of the election, the abandonment and the scorpions had had their chances. She took me the rest of the way, and Shonda Rhymes told me that I could maybe say yes sometimes. That was the series of events that shook me down.

A few days later, I found myself slumping. Day two of a retreat. I wasn't behind a camera, but I was sitting out, not fully in. Holding space.

I love sitting on the fence. I should have been a cat, or a squirrel. Observing one side, the other. Never quite putting a foot down, because the grass. The grass is emerald green on one side, and jade on the other. Sometimes I think I'll die perched on top of this fence in my life – never making a decision one way or the other.

Gentle confrontation from a trusted teacher pushed me off of the fence. She didn't actually tell me to participate, she just suggested I choose. Like my friend AVT used to say: Shit or get off the fan.

Shit, or get off the fence.

(Or really, just get off the fence).

So I jumped in. Participated. Decided to speak, even if clumsy, even if inexperienced. To ask the questions I had, even if they were stupid, to share my opinion even if it was lousy. To say the words on my heart rather than hold them in, waiting for the moment when they were arranged perfectly. Because most of the time I can't arrange them quite right, especially when feelings or time are involved. I prefer to practice. Script.

So I cried and laughed, made friends and mistakes. But I participated when I wanted to hold back.

And I have since, too. Mostly. I've gotten on planes and trains and boats, tried the Korean spa instead of staying in and watching out the window. I talked with a woman in a loud, gay karaoke bar about grief. And again, I opened my mouth when the Korean grandma touched my naked belly in jealously and told her I would happily trade my flat tummy for a baby in a heartbeat.

When life gives you the opportunity - participate.

If you need a nap, rest. Fuck fomo. Forget it. You can't miss out on your life if you participate fully where you are. Sometimes the face of God that looks like you needs a time out. Napping fully is a sincere form of prayer, just ask the Dalai Lama.

But you can't nap on the fence, you have to be vigilant. And that's no good at all. Vigilance and unnecessary guarding isn't participation. I have done this - grown weary weighing the options.

And I haven't always made the right choice. But god won't let you make the wrong choice more than 50% of the time, even if all you do is flip a coin.

The thing about the fence? Most of the time, the other side doesn't cease to exist because you chose one.

Most of the time, life gives you more chances.

So flip a coin. Participate. 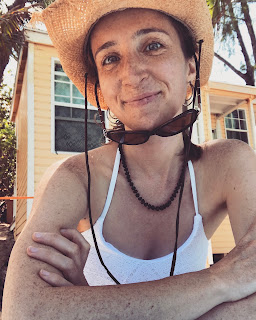