I woke up this morning from the nicest dream.

Usually I don't remember my dreams, and when I do they are usually about packing for a flight or wandering through an enormous house with lots of strange rooms. This morning my dream was of a former boyfriend, the first and only other man I've ever lived with, who popped into my dream, gave me the warmest hug, and said it was good to see me. I asked him what he was doing there, and he said he was going to ask me to marry him, to which I replied, "oh, that's nice, but I'm moving to Arizona tomorrow with Arnold Schwartzenegger." He said he understood, and repeated that it was good to see me. Then I woke up and had this warm, fuzzy feeling.

Our breakup was the most amicable of any breakup I've ever even heard of. We went our separate ways after he chose to move to the one place where I promised not to follow, but we stayed in touch until a few years ago with Christmas cards and occasional emails and phone calls. He friended me on Facebook once, but I told him that there were things in my life he probably didn't want to see (like my wedding) and didn't accept that friendship.

So this morning, just before I left to teach yoga, I looked for him again. Even though I've tried to reconnect on Facebook in the past, I haven't found him, but didn't find that unusual because of his super-top-secret job and (possibly) that he would have blocked me for the same reason I didn't accept his virtual friendship. So I tried LinkedIn, thinking that maybe there was a better opportunity to connect on a professional front. I found him easily, but his rank and location seemed out of date. Then I hit the Google.

When one googles a piece of history, one expects a number of alarming results, like new relationships, new sexuality, distressing photos that remind one of how unkind aging and sun damage can be. I felt prepared for long hair, a new sexual orientation, a family with six kids, a fundamentalist religion, or even an arrest warrant.

Instead, I found death.

The first ten links that popped up were describing someone who had died, and I quickly scrolled past them and looked on. Then a year caught my eye, then a location, then a rank, then a hometown.

I scrolled back up. And clicked.

The reports were brief, unhelpful, and uncaring. They described the mysterious death of someone who had never been loved, never belonged. Cold and calculated, like, "well, we found a body and we don't know how he died. We're awaiting autopsy results." No further news stories. Then a few crazy conspiracy theory articles, describing the five other officers who died of mysterious causes in the last few months. And nothing further.

My BFF Kathleen helped me do a little additional recon, as she's an amateur geneologist with access to helpful tools, like Ancestry.com where she helped me to locate his mother, his obituary, and a few other tidbits, like the fact that he's buried a few miles from my house.

Then I went to hold a baby who has the same name and a similar look. A miracle baby who was born early and just came home after a few months in the hospital.

I shelfed my baggage (sort of), moved on to do some real work for a few hours, and drove home.

I kept thinking of the dream.

So instead of calling his mother or returning to the bowels of the Google yet again, I drove to the Air Force Academy cemetery. The gate guard asked for my driver's license and asked where I was headed, and then told me to have a good day (yes, for real... "heading to the cemetery? Have a good day!").

I think I needed something more real than headlines, cold stories, and an absence on Facebook for me to feel like this was real.

The USAFA cemetery is quiet. Surrounded by trees, blue skies, and memorial plaques. There is a flag flying at half staff. I found his site in the Memorial section, reserved for those who died in the line of duty and sat there for a long time. I've visited my grandparents' graves before, but I was also present at their burials and know they lived long, happy, fulfilled lives. Their deaths were from old age and sun damage. I was the only person there for a long time, until an older gentleman jogged quietly through and saluted me. I didn't find much to say, and what I did say came out in a choked whisper, through streams of tears. I told him I was wearing his watch, which I was, because he loved watches and gave me one that I haven't worn much but started to wear a few weeks ago. The rest, I think, is private.

When the cemetery closed for visitors, I drove on to teach yoga teacher training. The heart chakra. I stopped at Whole Foods for some therapeutic dark chocolate and kombucha and on my way out I was cut off by an older man driving a lime green VW GTI. No one drives this car (seriously, look for one) except Jon. He loved that car.

I taught teacher training, and started off my crying my eyes out and telling the whole story, as I've just told you. We talked about the heart, and I remembered the difference between healthy and unhealthy grief. Healthy grieving is protecting an open wound as it heals, and in time reflecting back on the scar that it left. Scars are our tributes to the stories we have lived. They remind us of what we have lived through. Unhealthy grieving is not allowing the wound to heal, but creating an environment where it will fester and grow worse in time.

I have a lot of healing to do. 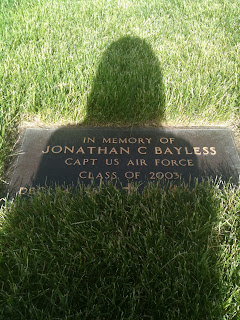 So because it is nowhere else on the internet, because all that is there is sterile and unfeeling, I share with you what the world should have known about Jon.