I have had the great honor and privilege of teaching at Cambio Yoga since the very beginning, way back in 2009. It felt like an honor to be invited to teach at a locally-owned studio, especially after I had been expressly un-invited to teach at a large corporate studio. Sure, I'd been teaching for years, but this was my first time teaching at a Real Studio. Before that, all I had done was teach in the fake places, like homes and elder care facilities, schools and parks. Even though I thought a donation-based studio would probably fold in three months, I felt like THIS was IT. The BIG TIME. When THE REAL TEACHING would begin.

(To my first six classes)

And it was the best thing that ever happened to me.

The first week, I just did my own practice. I taught myself the class I was planning to teach the mysterious students who had apparently not received the Invitation from the Universe to come take My First Real Class.

The second week I felt a little worse, but still did the practice I had planned. I had made up an entirely new sequence, just in case the first sequence that I hadn't actually taught to anyone was bad juju.

The third week I cried.

I had thought that this opportunity would be the beginning of something grand, that people would love me and that I would instantly become famous and people would publish my book and I would have a baby and....

(trust me, it only gets more ridiculous).

The fourth week I didn't even go into the studio. I sat in my car and waited to see if anyone would pull up. And then I cried again.

The fifth week I thought about throwing in the towel. I was driving like a madwoman across town to wait for a big ol' goose egg. It was humiliating. Didn't people know that I had been teaching for awhile? That I'd been practicing for a really long while? That my EGO was on FIRE?

I walked into the studio and sat on the floor in the middle of the empty room. It smelled like fresh paint and hope a day or two past its expiration date. I sat. I stared. The mirror stared back. I dedicated that hour to my practice, to what I needed. Not a preconceived, pre-set notion of who would be there, but who was actually there.

I showed up for the student in the room.

(It just happened to be me).

I said the things I needed to hear, which is all any of us teach anyway. I moved a little, I meditated a little. I had a great practice.

And you know what? The next week, I had more students. And I never had an empty Wednesday night class again.

This year, cambio. turned six. Six years of Wednesdays, give or take a few. Six years of showing up for whoever was in the room, teaching whatever it was I needed to learn.

We forgot, we forget, that yoga is a circle. The Earth is round, people, we're all in the front, and we're all tied for best.

Teach to the people in the room, wherever the room is. In studios, prisons, churches, schools, the park, or the privacy of your very own potting shed. Be the best, because - well - you are. 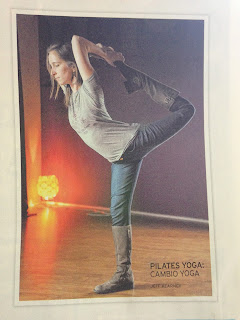