It is unreasonable that my trip home took only a bit more than a day, but the date never changed. That there is so much more to do, and yet nothing to be done, now that the lesson is clear. Mother India speaks in tricks and pixies. Hitchhikers who board you like pirates and drive you home, monkeys who steal your offerings from the mouths of stone gods. Land that knows nothing of time, whose people shake their heads in such a way to mean, "anything is possible."

Chai is a sacrament with an ancient promise of bringing people together, for appreciating friendship with no common language other than wrinkles and eyelashes and a shared devotion to the cow, the sage who wanders the back steps and rests in the road.

Nothing tangible is practical in the physical world, the higher value is spirit, a sense that everyone else shares - nothing you do will matter. Your body will grow roots or wings, and the pixies in your eyes will fly off to the next world, constellations of your spirit. And India will keep on clicking her heels, spinning around the same sun, but in her own manifestation of time which refuses to be measured by Gregorians or Mayans or anything a man could conceive.

The layers of irony in the Indira Gandhi airport - solar panels in a region that has lost sight of the sun through impossible pollution. Seventeen layers of security to access the hotel juxtaposed to immigration officers who couldn't care less about where you've been or what you've been up to.

All flights depart at midnight.

I saw the Himalayas at dawn, after a silent screaming match in my head... the driver conspiring with India to make me puke one way or another. We chanted to them, from the edge of the roof, a temple to someone's left breast. And then, as the sun took the sky, they faded behind the haze, their jagged skeletons too temperamental to be bothered with daytime hours. India is all smoke and veils, and the mountains play, too.

I had found a certain peace before I left, and settled into it until everyone pulled me aside to deliver the same message.

I'd like to be. I'd like to be certain about a few things, put others to bed. But I'm not in charge of fate - mine or yours or ours.

The yogis say to do your work, or sing, or stretch, or learn. Or really all of the above. And more than that, surrender. 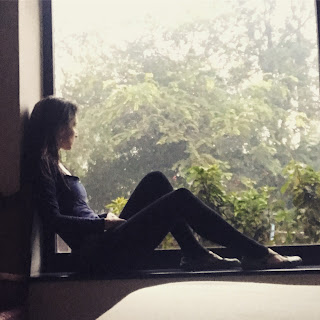