The Law of Attraction

I think I was in college the first time someone mentioned The Secret and Vision Boards and Drawing the Life You Want Towards you. It didn't sit well with me, but I was skeptical of gravity in those days, so less-established phenomenon didn't get much play time among the reruns of anxiety dreams and catastrophic daydreams, fantasies, and contingency plans. I believed in something subtler, and I suppose a felt an emotion more subtle than “believe.” My grandmother used to say “inkling,” which may not be an actual word, but that's what I had – an inkling that there was something true about the Law and something equally wrong about The Secret.

A paradox, of sorts.

Now it's unlikely to surprise you that faith and trust aren't getting their fair share of my brain sugar, either, but I do have a sense of The Way Things Work. For instance, I don't so much think that everything happens for a Reason, because Reason doesn't appear to drive on most winding wet roads late at night, and there's quite a lot of action there. No. If some higher power, or network of higher powers, or subset of anyone with enough wherewithal to balance a checkbook is in charge of this rodeo and splashing in a dash of Reason every once and again, then I'll stand corrected. I even get that you may believe this, and you may be right! But in my many odd years of experience, even Reason herself hasn't always made the best decisions. Instead, I feel that we can – I can – I choose to – make meaning out of things. We look at the odd collection pulled in from the garden this morning and cook up something glorious – or useable – or passable. We do our best, making sense through the rearview mirror that distorts and fades, whose image grows smaller each time we glance back.

As it is, some people are better painters, other better cooks. But no one gets a package of perfectly selected, pre-cut ingredients delivered to their door or the set of their cooking show. Nope. God and The Great Hereafter don't send Blue Apron boxes with secret instructions just to see if we can do exactly what they had intended, or at least, that's not what I believe. I think – I almost believe – that we get this box that would have been perfect for our recipe, except it has no eggplant. Or because it has an eggplant. Because it didn't all fit in the pan, or there wasn't enough to go around. And we can sink into moaning, as I have done, despairing the parmesan that God left out, leave it on the porch for the bears and the mice to dive into, or we can fucking make something out of it.

That's where I am right now, although i'm not sure what the hell I'm making. I've been taking instructions, half-following too many Pinterest recipes, chopping and sauteing, but God help me, I haven't a clue what the fuck I'm making. The Reason hasn't appeared yet. Sister Meaning is still out to supper with friends while I feel the resounding click of the clock as this produce does not get any fresher. I've gotten lost in wondering what my parents would do or want, my partner, my friends. How I could coerce this recipe based on a friend's allergies or preferences, and I've forgotten to ask myself.

As in: self, what are you doing here?

I'm in the no-man's-land of the northern Pacific right now, halfway between the two places that feel equally like home to me. Wondering what's in season on that side of the world? Answers? Belief? New prayers?

What will be waiting for me when I get back?

I'm hoping to dance in the waves with Sister Meaning, make friends or have a casual fling with Reason. But I also know better. I know that these things don't happen to us, they don't happen because We Set The Intention or put up magazine cut-outs on our vision boards. The Secret isn't halfway through the Pacific, in a magical group of islands, no matter what the advertisements told you while you were scouring for pictures of People Riding Horses on the Beach. Spending $800 on an airline ticket against your better judgement is not evidence of the world conspiring to make those dreams come true, it is a persistent reminder that money doesn't buy Happiness, but you can throw it and see if it sticks anyway.

Money, that is. I'm not sure if you can throw happiness.

And maybe that's just it. If you've found happiness, get out there and throw it around like it's a football and you're a cloudless fall day, full of crisp leaves. Perhaps those of us seeking will wind up there, gaze turned down and in our own world of mental sorting. Hit us in the head with it – pull us into the game. Help us realize that Brother Chance will tag us in at any moment, whether we're seeking happiness on our vision boards or not. Our job is not to have the blinders up.

And then, to make meaning. 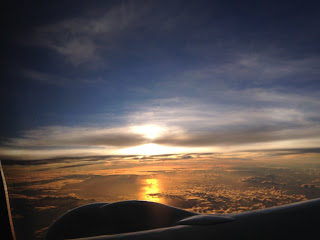