It is unusual for me to be inspired by a quote. Too often I think yoga teachers and writers alike dance on the tails of some other peacock rather than spreading their own feathers and seeing what they've got. Regardless, today is one of those days for me.

It's been a dry week, and my weathered skin is peeling from my hands and feet in the wake of my unfortunate experience with hand, foot, and mouth disease. The itchy bumps were bad, the guilt of having passed the yuck to others was worse, and now the universal metaphor of growth as I shed one skin and step out in something a bit pinker, a bit more raw. It always comes at the right time.

Even when we're not ready for it.

I'm at that fuzzy crossroads, like the place between seasons. It's faint and blurry, and you can tell traffic has come from one way and ended up another, but the feet that made those trails weren't coordinated, just like the feelings that come in this kind of crossroads aren't sorted and linear. They don't take turns, and they don't fall in line. This wave of sadness feels a lot like the flavor of last week, but the sun has shifted slightly and a lot more skin has shed.

The wind has stolen last week's footprints and whatever breadcrumbs lay there before are seven miles south or in the belly of the raven.

And I am, too. At least parts of me. Taking a good, hard look at myself and the choices I've made in the last year - the last five - the last ten, and I don't automatically think wow, I think ugh. As in, ugh, I followed that guy down that rabbit hole, dragged that one kicking and screaming from an early grave (that he fell into anyway), cinched that one into a tight mold.

What will happen to you, my darling, in the wake of my ineffectual love?

Instead of fixing myself, which is the only thing I can do, I have fixed the crap right out of everyone I meet (sleep with). And by fix I mean control, which is like fixing when there isn't a problem. Even when there is a problem, it isn't my problem until I decide that it is and go all Lorax on whatever The Thing is.

Except I forgot about me. I've forgotten about me all along. I cannot remember a time - not one minute - not one early memory - where I wasn't concerned about how what I did was going to affect someone else.

I've been joking lately about the title of my forthcoming book, which is mostly just sticky notes. Basically the point is that nothing that I've done has been about me. And in some ways that is good, I think. In yoga we speak of selfless service - of the union between the small "s" self and the big "S" Self, and that's great when we're talking of sharing bananas. But when it comes to who is on first, whose goals and aspirations lead the charge, who realizes whose destiny it gets sticky.

Who is on first?

In my past lives, I was a servant, a submissive, a glorified doormat. And I've been told based on the time and station of my birth that in this life I am supposed to realize myself. As in get selfish. And although you might mistake my actions with those poor men I've driven mad as selfish, I think that they were in fact residual effects of a life I hadn't finished yet. I see your potential and I will bend and maneuver any aspect of my life to realize. To realize in an active way, not to recognize, but to transform.

"I hope that one day you will have the experience of doing something you do not understand for someone you love." ~ Jonathan Safran Foer 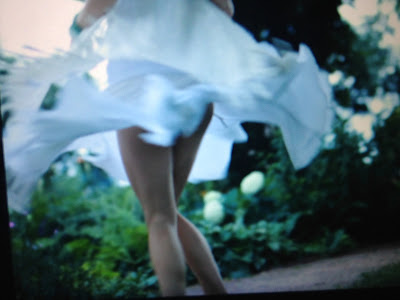 I tried to force that energy into a baby - to realize another human that I could direct so that I would be free from the disgrace of confronting my own reflection and rumination. Eager I was, as so many are, to pass the buck - to leave my mark as a Legacy rather than an impression of the hard work I have done.

This is the disease of the helicopter parent, the slave-driver who directs a child into a shape that does not suit her. The angry boss who snaps at the intern. This, I'm afraid, is me.

Tonight marks an important moment - a crossroads in the dust. I've made a series of interesting turns getting to this precise point and I feel as hapless and helpless as a dandelion seed on the wind. And perhaps this was the moment I was waiting for - the ability to surrender, to ride the wind and let the big "S" Self steer for awhile.

Faith does not come easily to me. I'm jealous if it does for you, and I'm grateful on your behalf.

For now, I'll stand here in the crossroads and wait for the wind to pull at my hair and sweep at my skirt and set me on my new direction, eyes closed.

And hope that faith sweeps me up.